As I live in the Highlands I would feel pathetic if I allowed the midge to seriously put me off a great new idea! Of course they are an infernal irritation but just like the rain, have to be negotiated round; round rather than with, (I don’t think there is any talking to a midge!) I found Norrie’s bee hood and a jacket with a tight-fitting hood, a large plastic bag in which to put my hand, a drawing board and charcoal for those rainy moments and persuaded myself that if my vision was slightly obscured either by a net or by wet plastic or both, I would have a more general view of mass and form and needn’t become distracted with the detail. The kit was reconfigured to include an aerosol of Smidge, a great new repellant made from Bog Myrtle that does not smell like cheap hairspray as does the popular alternative. I was ready to begin.

Before heading up the glen I needed to put structure into the daily practice. Was it to be the same square yard of ground and the detail of flowers and moss that came and went over a period of time? Was it to be the same view from the same place? And perhaps most importantly of all, how was the work to be presented?  Were separate sheets of paper the correct approach or a sketch book with the right number of pages to draw for a month or a week or a year?  I settled on an approach using something I learned some time before. There are a number of ways to make a simple book from folding one sheet of paper and there are different forms depending where you make one cut. I re-examined some samples I made on a course and settled on a simple form, the making of which I was able to remind myself by watching a small boy demonstrate How to Make a Book on You Tube! The version I chose had a page for each day of a week and so I settled on the idea of making one book of drawings in a week and to make these simple books from sheets of cartridge paper all the same size.

I now had a form and my daily practice began on July 21st, a date that felt comfortable with divisions of seven. That was six weeks ago and I now have six books containing forty two drawings. I will bind them together and they will become Six Weeks of Drawing in Glen Gour.

On August 1st I decided to add a second drawing to my daily practice. This time not bound together but singular, on heavy watercolour paper of the same size and I continued to draw every day, for the month of August.

These two projects have just finished and have added immeasurably to my wellbeing and sense of continuity. It is now hard to contemplate a day without half an hour of drawing. I allowed my instinct and intuition to lead me to a place and to a subject and slowly, by degrees I found myself finding a time of day and a place to go that became a natural part of my day. There is now a path worn through the grass to a rock I sit on every evening and I go there as naturally as I do to the washing line or poly tunnel to pick our supper.

2 thoughts on “A Daily Practice (continued)”

I am lucky enough to live on the west coast of Scotland, a part of the world I have loved all my life.

The Bridge Across. SOLD 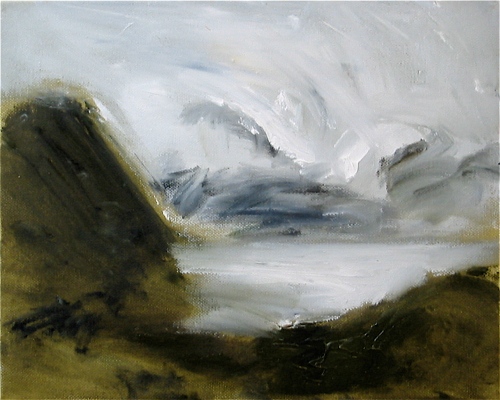 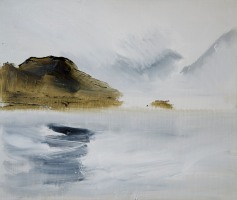 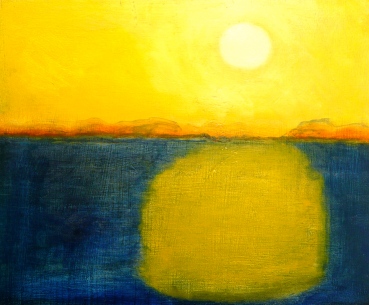 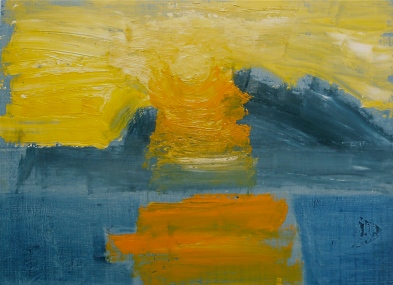 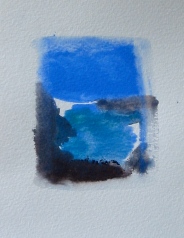 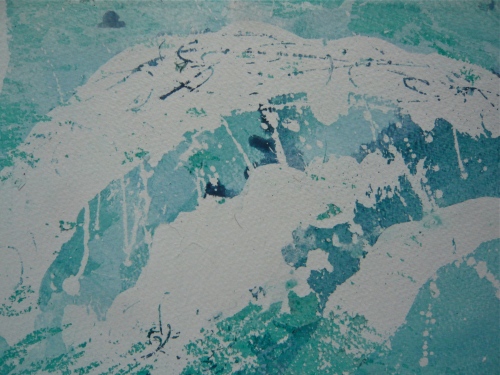 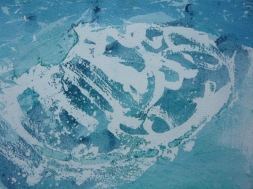 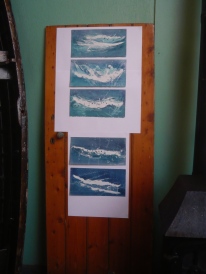 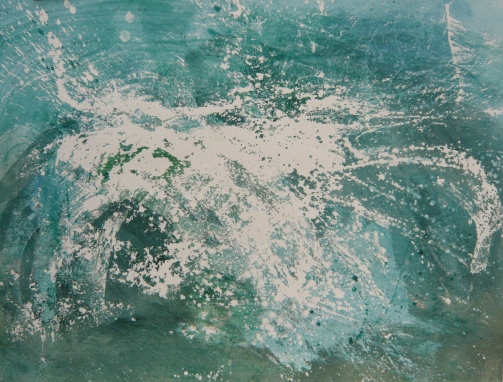 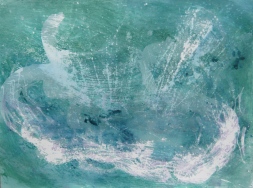 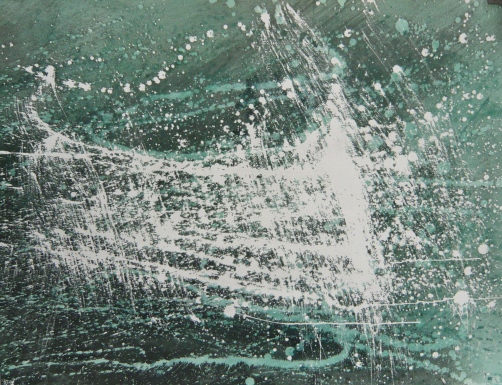 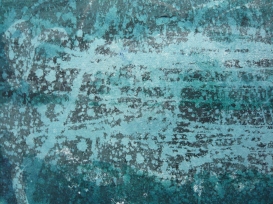 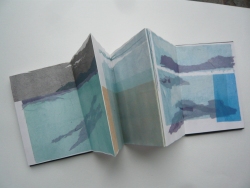 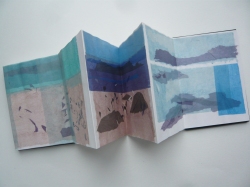 Barra, folded tissue drawings in a bought Seawhite A5 concertina sketchbook with case. 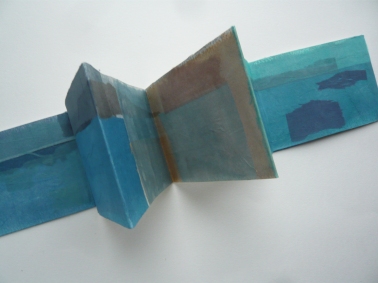 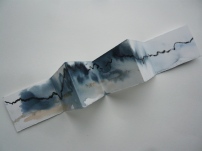 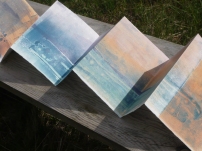 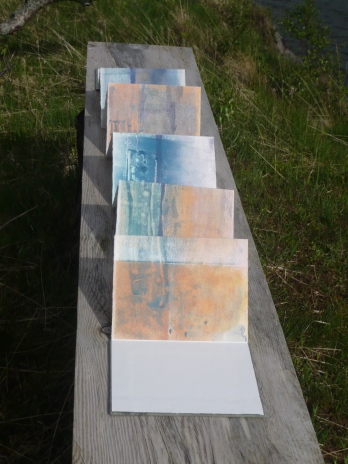 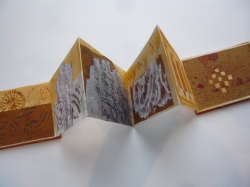 I went to North Uist and was taught how to make folded books by Corrina Krause, bookbinder. 2013

A walk round the garden in a sequence of photographs, folded.

Lochaline, a folded drawing of the shore.

Lochaline, a folded drawing of the shore. SOLD. 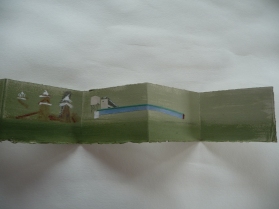 Lochaline, a folded drawing of the shore.
Cafe au Lait but rather thin on the coffee. #hugeflowers #dahlia #dahliacafeaulait #potgrown
The last of the soft fruit picking. The perfect ingredients for a delicious Sunday breakfast. #softfruit #grownyourown #organicgardening #homegrown
Sometimes I find myself in unexpected places! Today I walked along a short section of the Clyde whilst Norrie had his pre op for two cataract operations. #riverclyde #clydebank #goldenjubileehospital #eyeoperation #eyeswideopen
It may not be sweltering here on the west coast of Scotland, [for which I’m quite grateful] but we had a lovely paddle with Crinan chasing a ball and counting the number of fledged black back gulls. At least six pairs of a bird on the red list so nesting may have been more successful than usual despite the wet summer. Usually we believe the escapee mink put pay to the successful hatching of their eggs. #beachlife #dogwalk #paddling #bythesea #sandybeach #highlandholiday #westcoastofscotland
Cut flowers from the garden to welcome some new guests today #homegrownflowers #organiclife #cutflowers #fromthegarden #sweetpeas #dahliaseason #alstromeria #strongcolours #holidaycottagesuk #scotlandhighlands #bythesea #selfcatering
First of the season and very early this year. Some compensation for the amount of rain we’ve had this summer. Everything has grown enormously and now we’re hacking back the undergrowth. #chanterelles #firstoftheseason #wetsummer #highlandsofscotland #fungiforaging #temperaterainforest #westcoastofscotland #holidaycottage #selfcatering #bythesea
The postbox in Lochaline looks very topical #jubilee #platinumjubilee #70yearsaqueen #knittinginspiration #dressingup #lochalinestyle #soundofmull #westcoastcustoms #scotlandhighlands
A happy Sunday on the Isle of Mull. #treshnishisles #bonsai #herdielamb #lambinthekitchen #herwicksheep #bottlefed
On our return journey we have stopped in Cumbria #howtownhotel #cumbrianlife #stonebridge #venacular #oldstyle #retro
Abbotsbury subtropical garden felt like a little piece of Sri Lanka with Camellias from the original plant collectors. #subtropicalgarden #magnolia #plantcollection #exotic 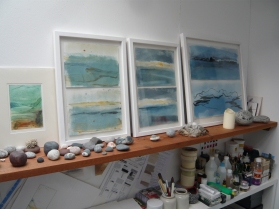 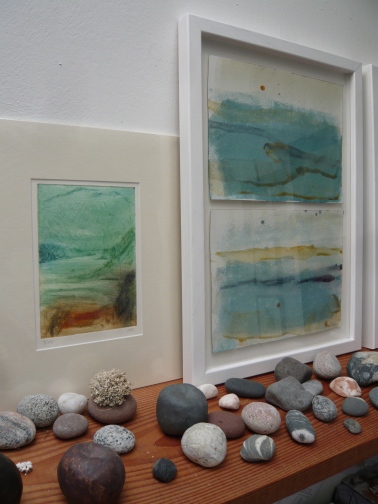 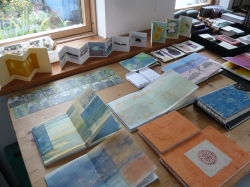 pages from an unbound book

Longing for "the endless immensity of the sea"

Artist specializing in painting/drawing, printmaking and photography. Also an avid explorer and traveller. This blog documents my art, photography and travels to wild, remote and beautiful places.

Where observation and imagination meet nature in poetry.

Migration notes from North to South and.......